Monument of Charles Perrault at the Tuileries Garden in Paris, France

3D
Scan The World
2,620 views 126 downloads
1 collection
Community Prints Add your picture
Be the first to share a picture of this printed object
0 comments

Monument of Charles Perrault at the Tuileries Garden in Paris, France

This 1908 marble monument was made by Gabriel Edouard Baptiste Pech (1854-1930) to celebrate French author Charles Perrault (1628-1703).
Many of his famous characters came to life in the 1697 publication of Perrault's "Stories or Tales of Past Times with Morals: Tales of Mother Goose". Some of the characters were based on similar characters in other much older works..such as Puss and Boots which was inspired by a similar character in a 5th Century Hindu collection.

The monument features a bust of a full-faced Perrault wearing a long curly wig and a billowy shirt. The lifesize bust is atop a roughly 9 foot plinth. On the right of the plinth is a figure of Puss In Boots...dressed like a Musketeer. To the left, three young girls hold hands and dance around the monument. 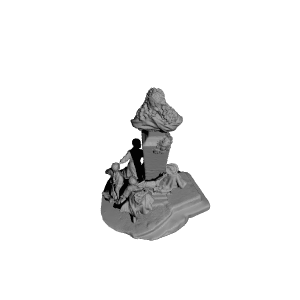 ×
1 collections where you can find Monument of Charles Perrault at the Tuileries Garden in Paris, France by Scan The World