Monument to Cézanne at the Jardin des Tuileries, Paris

3D
Scan The World
4,288 views 375 downloads
Community Prints Add your picture
Be the first to share a picture of this printed object
0 comments

Monument to Cézanne at the Jardin des Tuileries, Paris

In 1912 Maillol received a commission from Frantz Jourdain, the founder of the Salon d'Automne, and a group of friends of Paul Cézanne, for a monument to the master of Aix-en-Provence, who had died six years earlier. The committee was unable to solicit sufficient funds for the project, however, or agree on the details, and the outbreak of the First World War in 1914 put an end to their plans. Maillol, who regarded Cézanne as "the genius of modern painting" (quoted in J. Rewald, op. cit., p. 19), kept the idea alive, and returned to it following the end of the war in 1918.

Maillol had already made several preparatory studies, in which he tried out and rejected several reclining poses, including those seen in many of the smaller bronzes that have since been cast, in which one leg is raised significantly higher than the other. By 1920 the sculptor had arrived at the definitive state for his Monument à Paul Cézanne: the legs of the recumbent girl are only slightly bent, and she presents in her raised hand an offering of olive branches (not included in this lead version). Maillol intended her to be seen as a bather, one of Cézanne's important subjects; she reclines on a flowing drapery, as if she were resting in the current of a river, a symbol of passing time. Her forms are classical, having been rendered in simple, unadorned volumes, in keeping with Cézanne's conception of form as Maillol understood it. The antique stylization of the girl's hair carried connotations of the ancient Roman origins of Provençal culture. Maillol drew on the sense of serenity and repose that he had instilled in this work, as well as the motif of the olive branch, when he undertook his tribute to the French war dead in the Monument de Port-Vendres, 1921-1923.

The final version in stone was ready by 1925. Edouard Vuillard executed a large painting in 1931-1937 that shows Maillol at work on the Cézanne monument (Salomon and Cogeval, no. XI-120; fig. 1); he based this tribute to Maillol on a study that he made while the sculpture was in progress (no. XI-116; Musée d'Art Moderne de la Ville de Paris). Maillol had hoped that the citizens of Aix would place the sculpture by the fountain in their town square, believing that the setting and surrounding space were crucial to the harmony of his design. His plans fell through, however, and the town rejected the monument. Gaston Doumergue, the President of France, intervened, and had the state acquire the sculpture for the city of Paris. In October 1929 the stone version of the Monument à Paul Cézanne was finally installed, between the double ramps that lead to the terrace of the Orangerie in the Jardins des Tuileries gardens. A cast in lead replaced the stone sculpture in 1943; the latter is presently in the Musée d'Orsay, Paris. A bronze version from the present edition was installed in 1964 near the Carrousel in the Jardins des Tuileries, one of eighteen large sculptures that Dina Vierny donated to the French state. 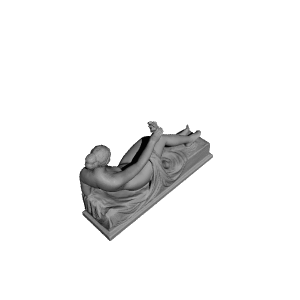 ×
0 collections where you can find Monument to Cézanne at the Jardin des Tuileries, Paris by Scan The World