Monument to the Royal Scots Greys in Edinburgh

3D
Scan The World
2,903 views 255 downloads
Community Prints Add your picture
Be the first to share a picture of this printed object
0 comments

Monument to the Royal Scots Greys in Edinburgh

The Royal Scots Greys Monument stands in Princes Street Gardens, Edinburgh. It depicts a Royal Scots Dragoon Guard in uniform with a bearskin hat, a sword and a  rifle, commemorating the fallen of the Regiment during the Boer War. The eagle insignia on the plaque was adopted by the regiment after Ensign Ewart captured it from the French at the battle of Waterloo in 1815.

The monument was made by a Scottish sculptor known for sculptural war memorials in the area, William Birnie Rhind (1853-1933). The piece was unveiled by the Earl of Rosebery on the 16th November 1906 and two plaques were added later to remember the regiments fallen in the two World Wars. 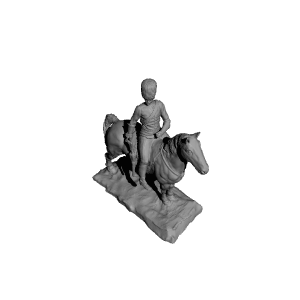