Monument to The Saint Petersburg water-carriers

3D
360°
Scan The World
2,215 views 351 downloads
7 collections
Community Prints Add your picture
Be the first to share a picture of this printed object
0 comments

Monument to The Saint Petersburg water-carriers

This sculpture of a water-carrier is located in front of the main entrance to the tower of the Museum of Water. Sergey Dmitriev, the sculptor of this monument, looked at numerous historial material in planning this work to ensure all details were exact. The sculpture was made in the first half of the 19th Century.

Before the advent of a centralized water supply the residents of Saint Petersburg would gather water themselves, collecting from nearby sources using buckets. Residents could also use the services of a water-carrier. These came in two types: those who carried the water using a yoke or hardcart, and those who delivered water by horse. Horses were expensive, so many water-carriers dragged a barrel of his or her own.

Water-carrier barrels were painted in different colours, depending on the place where they took water which would determine its quality and price. White barrels would carry the purest and most expensive water, taken from the Neva River; yellow was cheaper and dirtier from Fontanka River; green was canal water.

Police would arrest water-carriers who violated the rules. For this kind of 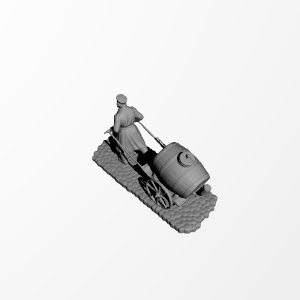