After Victor Hugo’s death in 1885, it was decided to erect a monument in his honour in the Panthéon as a pendant to Injalbert’s statue of Mirabeau. Rodin was awarded the commission in 1889. The sculptor chose to depict Victor Hugo in exile, seated amongst the rocks of Guernsey, his arm outstretched as if to calm the waves. It was an image both of the poet lost in contemplation and of the champion of the Republican cause.This first project, “which lacked clarity and whose silhouette was muddled”,was unanimously rejected. In 1891, the Ministry of Fine Arts found another site for it. It would eventually be erected in the gardens of Palais-Royal. From 1890 onwards, Rodin therefore worked simultaneously on two projects: the first, representing a seated Victor Hugo; the second, for the Panthéon, showing the poet standing. It was also a nude portrait of Victor Hugo, with none of the artifice or idealization usually seen in statues of great men.The body Rodin modelled attested to the writer’s advancing years, which did not fail to shock his contemporaries. The plaster of Seated Victor Hugo was shown at the Salon in Paris in 1897, alongside two of the inspirational muses, The Tragic Muse and Meditation or The Inner Voice, which had already accompanied the poet in the early sketches, but which were excluded from the final marble version. 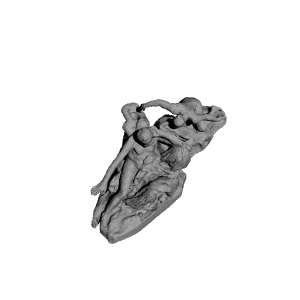