3D
Scan The World
1,866 views 132 downloads
1 collection
Community Prints Add your picture
Be the first to share a picture of this printed object
0 comments

This monument honors a key French statesman who played a significant role in the French Republican party and served in a number of capacities for the French government, eventually as Prime Minister from 1899-1902.

The sculpture has a central bust of Waldeck-Rousseau framed by a two classical columns and an arch.  On the right side of the bust are three figures, two men and one woman.  All three figures gaze upwards to the bust, representing the admiration of the French people.

Laurent-Honoré Marqueste was a french sculptor who practiced primarily in the Beaux-Arts tradition.  He has a number of other sculptures within the Tuileries Garden as well as throughout Paris. 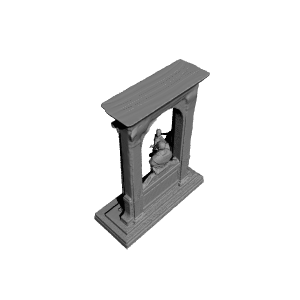