Mr. Thicknose was a creature me and my father created when I was six. We made him on a game called Spore; which I used to love to bits. For the buddyworld competition I though I would create my old imaginery friend in the real material world and this is what I got. I know my painting is really bad, but I had a lot of fun doing it.

This is the story paired with Mr. Thicknose:

One day, -well not exactly a day since Mr. Thicknose was cruising in space in his convertable flying saucer- Mr. Thicknose was outside his home planet of Yeuckitoria running some errands when he came across a rather bright planet. He listened through his tele-sound to hear something rather peculiar... music, proper good music he hadn't heard for ages.

"whirr wee ann err!" Mr. Thicknose exclaimed which meant "A primitive world, this should be fun!". and so flew down. When Mr. Thicknose landed the locals took absolutely no notice of him like primitives usually would. He triggered his translaters. "This planet still uses currency" he realised "If I am to teach them the way of Spode, I better make some of it."

The trouble with this world was that it wasn't designed for the Thicked nosed species and consequentially he had a rather bit of trouble earning cash. He tried using his nose like he would in his ship: He tried ceramics, carving, mechanics but nothing seemed to be his cup of tea.

Until he found something very interesting only theorized about to his species... entertainment. Sure Thicked noses would be entertained but only focusing and educational exercises, for instance they would listen to music in order to work more constantly. But this was entertainment that people gave up their earned money for in order to experience. This was completely ALIEN to Mr. Thicknose.

There were three ongoing competitions: Buddy racers, Monster extravaganza and almost as if it was designed for Mr. Thicknose, The Aircraft Race!

Mr. Thicknose immediately signed up, for it. He piloted his Saucer through the race, things were going swimmingly until... His Saucer shutdown to start the new Mega-soft Doors update. "Oh no! The one error society will never get passed" Mr. Thicknose panicked.

All because of that Mr. Thicknose came in second place, he was devistated. But he was surprised to be... congratulated, for losing? In this world people respected each other and celebrated their achievements rather than focusing on their errors.

Mr. Thicknose liked this model so much he decided to stay, a year later he decided to re-enter the competition... Do you think this time he will win? 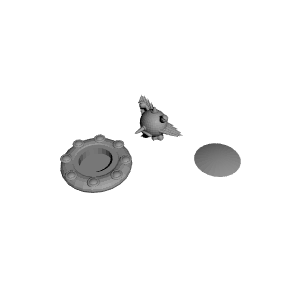