3D
Scan The World
3,191 views 374 downloads
2 collections
Community Prints Add your picture
Be the first to share a picture of this printed object
0 comments

The main shopping street in the center of Sint-Niklaas is the Stationsstraat. In the reorganization of the Stationsstraat in November 2013 had seven images of the hand of three artists a new prominence. They Stationsstraat more than just a shopping street. Who does less to shop, be pampered in a different way. While one his gaze drops on the windows and possibly carelessly ignores the images, comes another, the art lover, undoubtedly his draw.

Naiad is one of the early works of Alphonse Darville.The title 'Naiad' refers to the name 'Naiades' or water nymphs (name is related to the Greek word for "flow"). They are in turn seen as the daughters of the potamides or river gods in Greek mythology. In her right hand the Naiad wearing a shell that refers to its origin. The source
Darville has a great love for classicism in which he made ​​his debut. On expressionism and surrealism way he evolved into contemporary design, always with great authenticity. Besides draftsman and designer of medals he is a sculptor who subjects the viewer to a varied job with a dimension of a Roman austerity. In his quest for the absolute beauty, the pure form and the balance between them, he transcends any materialistic notion of figuration and non-figuration.
As director of Charleroi academy he had known and befriended Charles Mechiels, former director of the Academy Sint-Niklaas. Because of this he learned the initiative of Art know in the City and from his deep appreciation he suggested not only the plaster of "Naiad" but also the marble statue "Adolescent" (Salon of Fine Arts) and the bas-relief 'Medallion' (AZ Nicholas) available at Art in the City association.

DARVILLE Alphonse (1910-1990)
Sculptor, artist, Alphonse Darville medalist and ceramist, was born and deceased in Mont-sur-Marchienne. Gets his training at the Academy in Brussels (1924-1928) and was a student of oaVictor Rousseau (1865-1954). Founder and director (1946-1972) of the Academy in Charleroi. Co-founder of "L'Art vivant au Pays de Charleroi. His work is on display at museums in Liège, Mons and Charleroi.Publish in official mandate also monumental sculptures such as the "Architect" which adorns the facade of the Palace of Fine Arts in Charleroi."Godecharle" in 1931, "Rome Prize" in 1935 for the work "Torse de jeune fille" (Palace of Fine Arts, Charleroi). 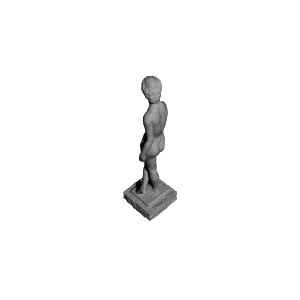 ×
2 collections where you can find Naiad in Sint-Niklaas, Belgium by Scan The World