3D
Scan The World
9,552 views 859 downloads
2 collections
Community Prints Add your picture
Be the first to share a picture of this printed object
0 comments

This is an image of Nandi, the sacred bull-calf. In Sanskrit Nandi means ‘joyfulness’ or ‘blissfulness’ and refers to the emotions experienced by a devotee in the presence of Lord Shiva.

Temples dedicated to Shiva, the Hindu lord of creation and destruction, are found throughout the Indian subcontinent. An essential element in any Shiva temple is the image of Nandi. It occupies an axial position, focusing the attention of the faithful from the outer halls of the temple directly into its spiritual heart, the ‘garbhagrha’ (‘womb chamber’).

Images of this scale and larger were usually housed in a pillared hall (‘mandapa’). This building stood independent of the temple but allowed Nandi to face directly into the eastern porch to the linga (phallic symbol of Shiva) sanctuary. This made explicit Nandi's intimate relationship with Shiva.

Nandi symbolises the religious duty (‘dharma’) of a devotee. As Shiva’s ultimate devotee, Nandi is in turn first worshipped by those intending to pay homage to Shiva himself in the temple sanctuary. He is represented as a bull-calf and always couchant. Nandi in the form of a processional vehicle (‘vahana’) is represented standing. Processional Nandis are typically constructed of wood which is then either painted or covered in sheet silver, depending on the wealth of the temple. 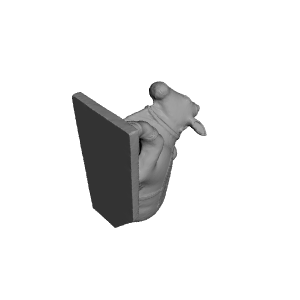 ×
2 collections where you can find Nandi by vam