3D
Scan The World
3,355 views 218 downloads
1 collection
Community Prints Add your picture
Be the first to share a picture of this printed object
0 comments

Demonstrating a prodigious talent as a student of Johannes Weldt, friend of the neoclassical theorist Winckelmann, Thorvaldsen won the gold medal at the Academy of Fine Arts in Copenhagen in 1793. Two years later he was awarded a scholarship to Italy and travelled to Rome in early 1797. His statue Jason with the Golden Fleece of 1803 established him in direct competition with Antonio Canova, whose subject matter he copied while working in a more severe, simplified style. After Canova's death in 1822, Thorvaldsen became the foremost neoclassical sculptor in Italy and for the following two decades his studio was occupied with major international commissions. Portrait busts in the antique style were an important area of production that enhanced his growing reputation and linked with his personal interest in antiquities, of which he had a substantial collection.

His extraordinary posthumous bust of Napoleon I is an allegory of Bonaparte as Emperor, crowned with a laurel wreath in the manner of antique portrayals of Roman leaders. The classically idealised torso is supported on the back of an eagle, a bird associated in many cultures with the gods of power and war. A globe positioned beneath the torso refers to Napoleon's worldly conquests. Monumental, with a severe expression and forceful intensity, the work is a compelling statement of ambition, ego and power. Until recently it was believed to have come from the collection of the Empress Eugénie, wife of Napoleon III. However this has now been discounted, as the plinth has a ledge on which the eagle stands, whereas the Hamilton Palace version does not. (from The Guide, 2001) 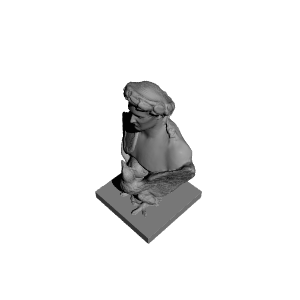