3D
360°
Scan The World
2,317 views 411 downloads
5 collections
Community Prints Add your picture
Be the first to share a picture of this printed object
0 comments

This life-size statue was sculpted by Guillaume who was an official artist during the Second Empire. His real career started after winning the Grand Prix de Rome in 1813. After that, he started working as an artist on his own winning many honours and becoming director of the Académie de France in Rome.

This work of his, was commissioned by the Prince Napoleon. He commissioned an architect to build a residence for him, for the atrium he commissioned this piece to Guillaume. In this sculpture, Napoleon I is represented wearing a draped toga and holding the Code Civil, he’s wearing a laurel wreath and has a eagle at his feet. 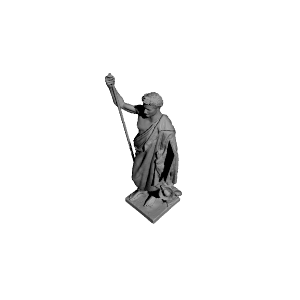