Narayana with the Serpent of Eternity at the Guimet Museum, Paris

3D
Scan The World
3,949 views 213 downloads
Community Prints Add your picture
Be the first to share a picture of this printed object
0 comments

Narayana with the Serpent of Eternity at the Guimet Museum, Paris

In Hinduism, Shesha (Sanskrit: Śeṣa), also known as Sheshanaga (Śeṣanāga) or Adishesha(Ādi Śeṣa) is the nagaraja or king of all nāgas and one of the primal beings of creation. In the Puranas, Shesha is said to hold all the planets of the universe on his hoods and to constantly sing the glories of the god Vishnu from all his mouths. He is sometimes referred to as Ananta Shesha, which translates as endless-Shesha or Adishesha "first Shesha". It is said that when Adishesa uncoils, time moves forward and creation takes place and when he coils back, the universe ceases to exist.

Vishnu is often depicted as resting on Shesha. Shesha is also considered a servant as well as a manifestation of Vishnu. He is said to have descended to Earth in four human forms or avatars: Lakshmana, brother of Rama; Balarama, brother of Krishna, Ramanuja and Manavala Mamunigal. Patanjali the major compiler of yogic traditions is also considered to be an incarnation of Shesha.

"Shesha" in Sanskrit texts, especially those relating to mathematical calculation, also implies the "remainder" – that which remains when all else ceases to exist.

Narayana (Sanskrit: नारायण IAST: Nārāyaṇa) is the Vedic Supreme God (including his different avatars) in Hinduism, venerated as the Supreme Being in Vaishnavism. He is also known as Vishnu and Hari and is venerated as Purushottama or Supreme Purusha in Hindu sacred texts such as the Bhagavad Gita, the Vedas and the Puranas.

Narayana is the name of God in his infinite all pervading form. Narayana is one of the names of bhagwan shri vishnu or krishna. He is the Supreme Purusha of Purusha Sukta. The Puranas present a seemingly divergent, but accurate description of Narayana (as an Enlightened Supreme Being). The fifth verse of the Narayana Sukta, a hymn in Yajurveda, states that Narayana pervades whatever is seen or heard in this universe from inside and outside alike. Another important translation of Narayana is The One who rests on Water. The waters are called narah, [for] the waters are, indeed, produced by Nara-Narayana (the first Being); as they were his first residence [ayana], he is called Narayana. In Sanskrit, "Nara" can also refer to all human beings or living entities (Jivas). Therefore, another meaning of Narayana is Resting place for all living entities. The close association of Narayana with water explains the frequent depiction of Narayana in Hindu art as standing or sitting on an ocean.

In Hindu sacred texts like Vedas, Puranas etc., Narayana is described as having the divine blue colour of water-filled clouds, four-armed, holding a Padma (lotus flower), mace Kaumodaki, Panchajanya shankha (conch) and a discus weapon Sudarshana Chakra. Narayana is also described in the Bhagavad Gita as having a 'Universal Form' (Vishvarupa)Vishvarupa which is beyond the ordinary limits of human perception or imagination. 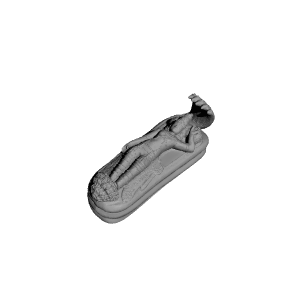 ×
0 collections where you can find Narayana with the Serpent of Eternity at the Guimet Museum, Paris by Scan The World