3D
Scan The World
1,025 views 137 downloads
Community Prints Add your picture
Be the first to share a picture of this printed object
0 comments

This statue is a copy of the marble original which stands in the Cour Carre of the Louvre, Paris.

Sculptor Paul Dubois spent many years in Italy from 1859 to 1863, engaging with the art and mythology such as this statue of the self-obsessed Narcissus, who fell in love with his own reflection as part of the machinations of Nemesis, Goddess of retribution and revenge. Realising his love could never come to fruition, he committed suicide.

The statue departs from the traditional Neoclassical models but offers instead a study from life. It was a big hit with critics, who appreciated the focus on beauty without feeling wedded to realism. Dubois statue encouraged several commissions in Paris and Luxembourg. 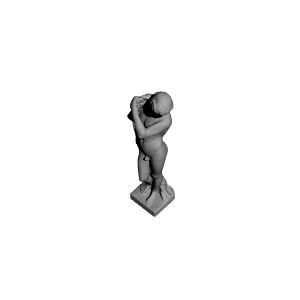 ×
0 collections where you can find Narcissus by Scan The World