Nine thousand years ago in Turkey, a large settlement called Çatalhöyük thrived for more than a millennium. Full of densely packed mud brick houses covered in paintings and symbolic decorations, its population hovered around 5,000. That made it one of the biggest settlements of its era, somewhere between an outsized village and tiny city. Now, archaeologists excavating there have discovered a rare, intact statuette of a woman buried carefully with a valuable piece of obsidian.

Figurines resembling this one, with large breasts, belly, and buttocks, have been found throughout the Anatolian region. But this is one of the only intact examples ever found. At nearly seven inches long, it's also one of the largest. Made of marble, it lay buried beneath the floor of a neolithic home for 8,000 years before its excavation this past summer.

n the mid-twentieth century, archaeologists like James Mellaart believed female figurines like this one represented fertility goddesses. This idea became popular in New Age culture, whose adherents celebrated the idea that ancient peoples were woman-centric and shared a cult of goddess worship. But over the past twenty years, evidence from Çatalhöyük and contemporaneous sites have undermined this interpretation.

As Stanford archaeologist Lynn Meskell has pointed out in a number of papers about figurines found at Çatalhöyük, little material evidence suggests that these curvaceous statuettes were the objects of worship. Nearly all such figurines have been found in garbage piles, as if they were built for a specific purpose—whether spiritual or playful—and then thrown away. They are also rarely built with bases, so they could never have been erected for display. Instead, they might have been passed from hand-to-hand, or perhaps worn as ornaments.

By contrast, statues and representations of animals at Çatalhöyük are clearly given specialized treatment. Bull horns are mounted on walls and next to doors, while some animal bones are embedded inside the plaster walls. Paintings of leopards, bulls, and other animals are given what appears to be special symbolic significance in homes. If any figurines would be candidates for worship, it would likely be these animal representations rather than the plump women. 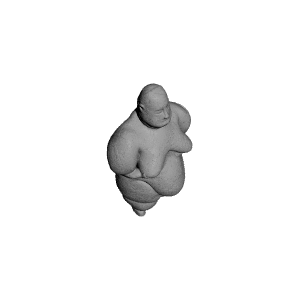