In this sculpture, Andreas Schluter depicted Neptune, the Roman counterpart of the Greek god of the sea and freshwater, Poseidon. He was also the god of horses, often portrayed during racing or in a chariot, as well as with sea creatures, like here. He and his brothers, Jupiter and Pluto, were the inspiration behind naming the three planets in our Solar system. 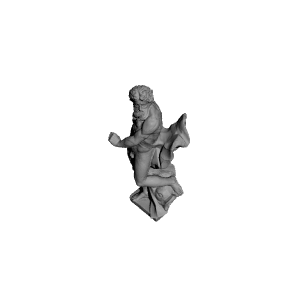