Neptune at The Louvre, Paris

3D
Scan The World
9,442 views 1,180 downloads
4 collections
Community Prints Add your picture
Be the first to share a picture of this printed object
0 comments

Neptune at The Louvre, Paris

This marble sculpture of Neptune was carved by Antoine Coysevox (starting in Lyon in 1640 and finishing in paris in 1720). Neptune (Latin: Neptūnus) was the god of freshwater and the sea in Roman religion. He is the counterpart of the Greek god Poseidon. In the Greek-influenced tradition, Neptune was the brother of Jupiter andPluto; the brothers presided over the realms of Heaven, the earthly world, and the Underworld. Salacia was his consort. 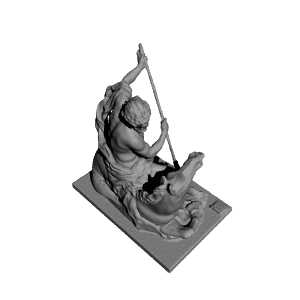 ×
4 collections where you can find Neptune at The Louvre, Paris by Scan The World