Nereid in The British Museum, London

3D
Scan The World
2,568 views 103 downloads
Community Prints Add your picture
Be the first to share a picture of this printed object
0 comments

Nereid in The British Museum, London

The Nereid Monument is a sculptured tomb from Xanthos in classical period Lycia, close to present-day Kinik in İzmir Province, Turkey. It took the form of a Greek temple on top of a base decorated with sculpted friezes, and is thought to have been built in the early fourth century BCE as a tomb for Arbinas (Lycian: Erbbina, or Erbinna), the Xanthian dynast who ruled western Lycia.

The tomb is thought to have stood until the Byzantine era before falling into ruin. The ruins were rediscovered by British traveller Charles Fellows in the early 1840s. Fellows had them shipped to the British Museum: there some of them have been reconstructed to show what the East façade of the monument would have looked like.

The monument is now named after the life-size female figures in wind-blown drapery. Eleven survive, which would have been enough to fill the spaces between columns on the east and west sides, and the three on the north. Jenkins speculates that there might never have been figures on the south side. They are identified as sea-nymphs because various sculpted sea creatures were found under the feet of seven of them, including dolphins, a cuttlefish, and a bird that may be a sea-gull. They have generally been called Nereids, though Thurstan Robinson argues that this is imposing a Greek perspective on Lycian sculptures, and that they should rather be seen as eliyãna, Lycian water-nymphs associated with fresh-water sources and referenced on the Letoon trilingual inscription, which was discovered a few kilometres to the south of the site of the Monument. 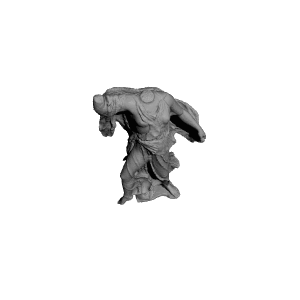 ×
0 collections where you can find Nereid in The British Museum, London by Scan The World