3D
Scan The World
1,438 views 87 downloads
Community Prints Add your picture
Be the first to share a picture of this printed object
0 comments

Marble statue probably representing a Nereid, which occupied one of the intercolumniations of the Nereid monument.

The statue is a representation of a draped female figure running to the right. She wears a long unbelted chiton with sleeves which appear to be continuous with a short diploidion that reaches to just below her breasts. This garment is confined by narrow strings passing over the shoulders. In her right hand she probably held part of the skirt and also, possibly, part of a large mantle which passes behind her back and over her left shoulder and is held in her left hand. A sea bird floating over the water with its wings spread appears below the bottom of the folds of the drapery. 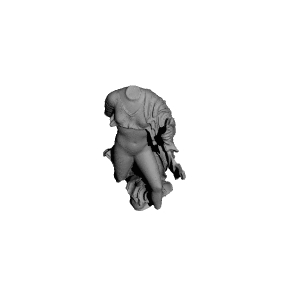