3D
5,254 views 306 downloads
3 collections
Community Prints Add your picture
Be the first to share a picture of this printed object
0 comments

This is my Sculpting Exercise challenge. hope you guy like it.
Software: sculptris

Story of Nian the chinese monster
According to Chinese mythology, a Nian (simplified Chinese: 年兽; traditional Chinese: 年獸; pinyin: nián shòu) is a beast that lives under the sea or in the mountains. Once each spring, on or around Chinese New Year, it comes out of hiding to attack people, and prefers children. Weaknesses of the Nian are reported to be a sensitivity to loud noises, and a fear of the colour Red. The Chinese Lion dance (Chinese: 舞龍舞獅) is known to have originated from the legend of the Nian. The tradition has its origins in a story of a Nian's attack on a village. After the attack, the villagers discussed how to make the Nian leave them in peace. The traditions of firecrackers and red robes found in many Lion Dance portrayals originate from the plan the villagers had in which drums, plates and empty bowls were hit, red robes were worn, and firecrackerswere thrown, causing loud banging sounds that they hoped would intimidate the Nian. According to this same myth, the Nian never appeared in the village again. The Nian was still believed to exist, but was never expected to make an appearance to a human again. It thus became symbolic in the eyes of the town people, and they continued doing what was needed to drive it away. With time this become a tradition. 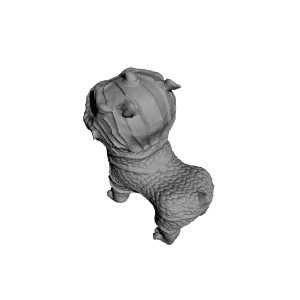