Night Texture at the Middelheim Museum

3D
Scan The World
2,771 views 118 downloads
3 collections
Community Prints Add your picture
Be the first to share a picture of this printed object
0 comments

Night Texture at the Middelheim Museum

Masayuki Nagare (born February 14, 1923) is a modernist Japanese sculptor, nicknamed "Samurai Artist" for his commitment to traditional Japanese aesthetics. He was born in 1923 inNagasaki to Kojuro Nakagawa, the founder and president of Ritsumeikan University in Kyoto. As a teenager, he received training in the martial artsof a samurai, particularly swordsmanship, and lived in several temples in Kyoto, where he observed the patterns of rocks, plants, and water created by traditional landscape artists. In 1942, he enrolled at Ritsumeikan University, where he studied Shintoism and was apprenticed to a master swordsmith. He left university in 1943 to join the Imperial Japanese Navy and did not return to complete his studies. Nagare served as a Zero Fighter pilot in the Pacific War. After the War, he traveled all over Honshu Island until the mid-1950s, witnessing the desolation of the ruined countryside, developing a thorough understanding of the Japanese landscape, and becoming interested in local crafts such as pottery. His fascination with graveyard tombstones that had survived wartime bombing led to his longtime choice of stone as his preferred medium.

Nagare's art is strongly influenced by Shintoism, Zen Buddhism, and traditional Japanese martial arts. His principal stone-carving techniques include warehada ("cracked skin" or "broken texture"), in which the surface is left rough, with visible chisel marks, and shinogi awase ("ridges joined together"), which describes the meeting of two highly polished surfaces. Some of his works exhibit the contrast between the two techniques. His sculptures' clean lines often follow the subtle curvature of Japanese swords. Nagare's works include "Cloud Fortress," which survived the 9/11 attacks at the World Trade Center (New York City) but was destroyed in the rescue and recovery efforts,"Sakimori" (Frontier Guardian) installed in theHonolulu Museum of Art, “Hamaritsurin Garden” in Seto Ohashi Commemorative Park (Kagawa Prefecture, Japan), "Receiving"  stored at the Museum of Modern Art in New York City, and "Transcendence" (informally called "The Banker's Heart" by locals) installed in A.P. Giannini Plaza at 555 California Street (formerly the Bank of America building) in San Francisco, California. 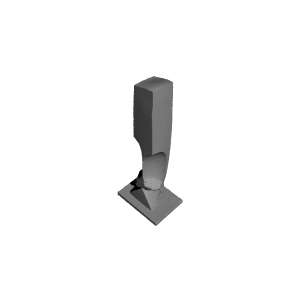