3D
Scan The World
3,165 views 150 downloads
1 collection
Community Prints Add your picture
Be the first to share a picture of this printed object
0 comments

This Nike sculpture is a revisitation of the classic Nike iconography. Here, the woman is a girl and is depicted as a young lady, with the non-finito technique. S. konenkov is sculptor, master of portrait and the author of monumental works. Born into a peasant family. From 1892-1896 studied at the MSPSA under S.I.Ivanov and S.M.Volnukhin. Graduated from the School as a unclassed artist. In 1897 he was awarded the "S.M.Tretyakov award" and set off for Europe visiting Germany, France and Italy. In 1898 he returned to Russia and produced the statue "The Stone Breaker" (1898) for which he won a grand silver medal a year later. From 1899-1902 he studied at the Higher Art School a filial of the Academy of Arts in St. Petersburg in V.A. Beklemishev’s studio. As a result of a dispute with his teacher he produced his graduation work independently, which was entitled "Samson Breaking His Ties". It infuriated the Academy’s Council and the statue was destroyed in 1905 (reproduced in the journal Mir Iskusstva in 1902), however he still received his art-sculptor degree. He worked and lived in Moscow from 1902 -1923. He took part in the 1905 revolution leading a military unit. In 1908 he became a member of the New Society of Artists, in 1909 a member of the Union of Russian Artists and in 1917 – a member of the World of Art group. From 1912-1913 he worked in Greece and Egypt. He taught at the All-Russia Art and Technology Workshops between 1918-1922. In 1923 he was part of an art exhibition which travelled to New York, he did not return to Russia. From 1924 until 1945 he worked and lived in the USA and Italy. In 1945 he returned to Moscow receiving a triumphant welcome. He wrote novels of his reminiscences entitled "My Age" (1971), "The Earth and the People" (1968) and "Floor to the Young" (1958). In 1954 he became a full member of the Academy of Arts of the USSR, in 1958 a People’s Artist of the USSR and in 1964 a the Hero of Socialist Labour. S.T.Konenkov was inspired by Russian folklore and ancient mythology. The sculptor’s creative work appears to focus on the main trends in Russian plastic arts of the late 19th– early 20th centuries. Social problems are present in his work (The Stone Breaker, 1898) and elements from folklore and fairytales (The Slav, 1906). The work he produced was influenced by antique art combined with the classical idealism of images and dramatism fundamental to the interpretation of mankind during the early 20th century (The Girl, 1914). His wood sculptures date back to the 1900’s, and were created in the spirit of primitive art, where the texture of the wood plays a remarkable role. The feeling for the material is one of the distinguishing features in Konenkov’s art. He was able to relay the colour and the rich variety of texture: the warmth of the living body, soft folds in garments, the roughness of the wooden base, from which thepagan Slavonic god Stribog or an amusing wood sprite might appear 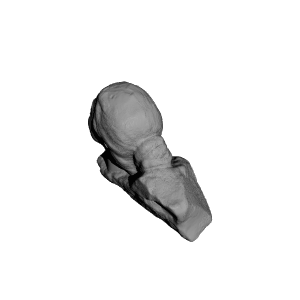 ×
1 collections where you can find Nike by Scan The World