3D
Scan The World
1,777 views 47 downloads
Community Prints Add your picture
Be the first to share a picture of this printed object
0 comments

The monument to Nikolay Mikhaylovich Przhevalsky in the Alexander Gardens was sculpted by Ivan Shreder and installed in 1892. At the top of a granite base, representing a cliff face, is a larger than life bust depicting a moustached Przhevalsky from the mid-chest up. He is looking straight ahead. His hair is worn straight back and he is wearing a double breasted uniform with a medal on the right side and high collar. Braids are wrapped over his right shoulder. An inscription on the granite base is written in Cyrillic and identifies the subject buy last name.

At the base of the pedestal is a life-size bronze sculpture of a Bactrian camel, his mode of transportation on his expeditions. The double-humped camel is sitting on all four legs while wearing a camel blanket and a large packed bag.

Przhevalsky's uncanny resemblance to Josef Stalin has generated the urban legend that his is the father of Stalin. However, there is no record that Nikolay Przhevalsky ever travelled to Georgia, Stalin's birthplace.

Another version of this object excluding the cliff supporting the sculpture can be downloaded here. 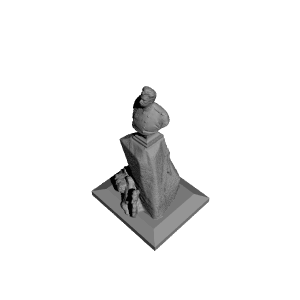