3D
Scan The World
1,740 views 112 downloads
Community Prints Add your picture
Be the first to share a picture of this printed object
0 comments

Niobe is a mythological figure. According to the legend, she boasted of her fourteen children, seven male and seven female (the Niobids), to Leto who only had two children, the twins Apollo and Artemis. Using arrows, Artemis killed Niobe's daughters and Apollo killed Niobe's sons. According to some versions, at least one Niobid (usually Meliboea, along with her brother Amyclas in other renderings) was spared. Their father, Amphion, at the sight of his dead sons, either killed himself or was killed by Apollo for having sworn revenge. Devastated, Niobe fled to Mount Sipylus and was turned into stone, and, as she wept unceasingly, waters started to pour from her petrified complexion. Mount Sipylus indeed has a natural rock formation which resembles a female face, and it has been associated with Niobe since ancient times and described by Pausanias. The rock formation is also known as the "Weeping Rock", since rainwater seeps through its porous limestone.

Here Niobe is depicted as a woman with all the attributes of maternity: her round-shaped body, emphasized by her nudity, her breasts and wide hips make her an epitome of feminity in its maternal aspect. 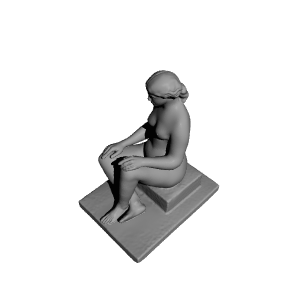 ×
0 collections where you can find Niobe by Scan The World