3D
Scan The World
1,235 views 52 downloads
Community Prints Add your picture
Be the first to share a picture of this printed object
0 comments

The Monument to Nizami Ganjavi in Saint Petersburg is located in a square situated between houses 25 and 27 on Kamennoostrovsky Prospekt.

The sculpture had been founded in Baku and then presented to Saint Petersburg as a gift from Azerbaijan on the occasion of the 300th anniversary of the city’s origination.

The sculpture was created by Gerush Babayev, an Azerbaijani sculptor, alumni of the Saint Petersburg Art and Industry Academy. Felix Romanovskiy, Honoured artist of the Russian Federation is the author of a pedestal's project. The pedestal was made in “Kombinat-skulptura” enterprise of Petersburg.

Vladimitr Putin, the president of Russia and Heydar Aliyev, the then president of Azerbaijan also participated in the opening ceremony of the monument.

he head of the Iranian Philology Department and the dean of the Oriental Faculty of St. Petersburg State University I. M. Steblin-Kamensky, speaking of this monument characterises the description of Nizami as an Azerbaijani poet as a fruit of nationalist tendencies and as an “outright falsification” 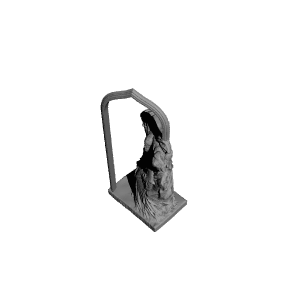