3D
Scan The World
1,826 views 84 downloads
Community Prints Add your picture
Be the first to share a picture of this printed object
0 comments

This is one of two Blackamoor figures on sale at The Christie's Noble & Private Collections auction (26th April 2017). Originating from the second half of the 19th Century.

Blackamoor figures are sculptures and other depictions of exoticized figures, usually African males but sometimes other non-European races, used in European art in the Early Modern period. They occur in various media, often holding a tray or some other container, which was available for practical use. They occur in jewelry, armorial designs and decorative art. They often represent a conceit depicting a symbolic servant, and large examples of about half-size were placed on either sides of doorways, as real footmen might be. These examples were typically in cheaper materials such as painted wood, or plaster. 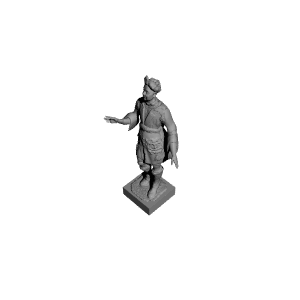