3D
Scan The World
2,222 views 84 downloads
Community Prints Add your picture
Be the first to share a picture of this printed object
0 comments

Jörg Immendorff, born in 1945, the last year of World War II, in Northern Germany, is one of the most significant as well as controversal, contemporary German artists. Immendorff's works always deliver a sharp socio-historical message. The book traces the life and career of an artist who has spent most of his life upholding anti-establishment views.

Along with several other prizes, Immendorff got awarded the Bundesverdienstkreuz, the most important medal a German government has to give away. He also received the ´Premio Marco` from the Museum of Modern Art in Monterrey (Mexico). Being invited to the ´documenta 5´ by Harald Szeemann, back in 1972, Immendorff is still celebrating proverbial triumphs: His work is currently shown in the exhibition ´The Triumph of Painting´ at the SAATCHI COLLECTION in London; the ´Neue Nationalgalerie´ in Berlin is preparing a solo exhibition with him.

From this sculture called Nose, it's visible the connection with China, which is an “old flame“ of the artist, who enjoys an international reputation: Maoist as a young man and constantly influenced by the Beuys´esque idea of a ´direct democracy´, Immendorff travelled to China in the 1980´ies. The aim was to meet (back then young) artists at the ´Central Academy of Fine Arts´ and to support them. Since then, he and Fang Lijun, the most important figurative painter in China, have been friends. 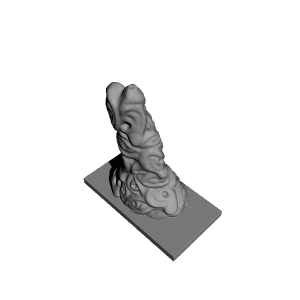 ×
0 collections where you can find Nose by Scan The World