Nozzle scrubber pad for Wanhao i3 and others

3D
2,214 views 49 downloads
Community Prints Add your picture
Be the first to share a picture of this printed object
0 comments

Nozzle scrubber pad for Wanhao i3 and others

Edit:3/20/17 Okay added some new pictures of a used nozzle scrub pad that I removed from the printer.
Edit:2/14/17 Well I have been doing some tests with other cooling shrouds and I have some mixed news. So I have been using a diii cooler remix with the scrubber pad for some time. It cuts off some of the bed and overall was really limiting what the machine could do. So I tested two more coolers that connect on the back side of the printer. I tested both the cobra cooler and the ciii cooler. The ciii cooler had the same problem as the diii only since its on the back it limited bed usage even more. So I would overall simply call it incompatible. I was not using the short version I tested at a .2 layer height. The cobra cooler however looks promising as it did not run into the scrubber pad right off the bat. The was at .2 layer height. I am currently thinking that it may be a good choice if you plan to use this mod and I plan to start using it.
Edit:1/30/17 Hindsight is 20/20 here, I think i might be a smart idea to put something like a insulating washer on before tightening down the scrub pad. I don't know if the nut could scrub off the protective layer on the bottom of the bed.
Want to add a new feature to a cheap 3d printer like the wanhao i3? Why not add the ability for the printer to clean the print nozzle before every print. This thing was made to give that feature in a cheap easy to do way. Using Velcro with a sticky back adhesive allows one to easily remove and replace old and worn wiper pads. See it in action here https://www.youtube.com/watch?v=ydbMzVH3A2E

Hardware needed
This thing does need a small bit of hardware to get going. You will need Velcro I used the fabric like side 1 M3 countersunk screw around 20mm (10mm should work if not using a glass bed) 1 to 3 M3 nuts (will need more nuts if you are using a glass bed. Optional 1 M3 locknut to replace normal nut for tighter fit 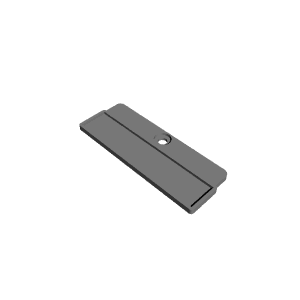