Nubian lion and its prey at the Jardin du Luxembourg, Paris

3D
Scan The World
5,474 views 759 downloads
3 collections
Community Prints Add your picture
Be the first to share a picture of this printed object
0 comments

Nubian lion and its prey at the Jardin du Luxembourg, Paris

This nubian lion sculpture stands tall and proud above its prey of an ostrich. It is on display at the Jardin du Luxembourg and is by Auguste Nicholas Caïn - a noted French sculptor in the Animaliers school, known for his portrayals of wild and domesticated animals. Caïn was born in Paris, and studied under Rude, Guionnet, and Pierre-Jules Mêne (whose daughter he married in 1852). His first exhibit in the Salon of 1846 was a wax model of a linnet defending her nest from a rat, later cast in bronze and shown at the 1855 Salon. Between 1846-1888, Caïn exhibited 38 models at the Salon. From 1868 onwards he concentrated on monuments, including the Chiens de meute at the Château de Chantilly, Le Lion de Nubie et sa proie in the Jardin du Luxembourg, and Tigress and Peacock in the Gardens of the Tuileries. In 1879 he assumed management of his father-in-law's foundry upon Mêne's death. Henri Caïn, a well known librettist, and Georges Cain, the painter, were his sons. 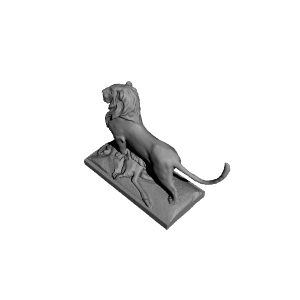 ×
3 collections where you can find Nubian lion and its prey at the Jardin du Luxembourg, Paris by Scan The World