This is a headless and handless study of Nude Pierre de Wissant for the Burgher of Calais group of sculptures.

Although cast in plaster it Pierre looks so tantalisingly human. His carefully modelled form is convincing as flesh, the light flowing over the surface describes each muscle and every sinew. Rodin took great effort to find a suitable model to represent Pierre, who moved around the studio to enable him to record his idiosyncrasies and capture his inner motivations and emotions, but the final figure is an agglomeration. That life force is palpable in the presence of Pierre de Wissant as we circle his anguished body, empathizing with his momentous decision and wondering if we too might be capable of such courage and self-sacrifice. 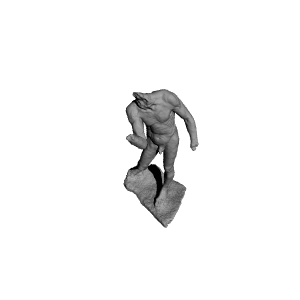 This is a fantastic and well detailed model. That detail did come at some minor cost: the model sliced okay in Slic3R PE until I added supports, and then something kept the application from slicing all the way. I did have to (in a separate program) remove the bottom 1mm of the (unscaled) .stl, as the scan is not flat on the bottom. Once this was done, Slic3r had no issues slicing with supports. Printed in MatterHackers Build Series PLA, at 0.15 mm layer heights.