3D
Scan The World
3,754 views 269 downloads
Community Prints Add your picture
Be the first to share a picture of this printed object
0 comments

Flora is a lifesize bronze sculpture by the French artist Aristide Maillol founded in 1910. This particular bronze has been installed in the Jardin du Carrousel of Tuileries, in the first arrondissement of Paris. It is part of a series of statues by Maillol exhibited outside in the garden.

Aristide Maillol began his career as a painter and tapestry designer working in the decorative style of the Nabis, a group of artists inspired by the simplicity of line, flat patterning, and expressive color theory of Paul Gauguin's work in Brittany. By the latter half of the 1890s, however, the intricacy of Maillol's tapestry work was threatening his eyesight, and he turned entirely to sculpture.

At the turn of the century, Auguste Rodin's highly naturalistic and emotionally charged work was the dominant force in the revival of sculpture. While undoubtedly inspired to observe nature by Rodin's example, Maillol was primarily concerned with a classical purity of line and form. This emphasis is readily apparent in "Flora," where the figure's graceful pose, emotional tranquility, and clinging, translucent drapery recall ancient statuary. Typical of Maillol's idealized female figures, "Flora" fuses the serenity and monumental presence of the classical tradition with the immediacy and vitality of a naturalistic depiction. "Flora," however, is no mere pastiche of styles and vocabulary. The symbolic significance of "Flora" - an embodiment of the bounty of nature - finds direct expression in the figure's full, rounded torso and sturdy limbs. By balancing real, human characteristics with eternal, idealized forms, Maillol dynamically reinvented the classical tradition with a modern sensibility. 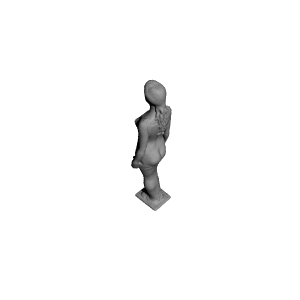 ×
0 collections where you can find Flora by 3DLirious