3D
Scan The World
3,037 views 202 downloads
1 collection
Community Prints Add your picture
Be the first to share a picture of this printed object
0 comments

Lifesize marble sculpture by Henri-Louis Cordier depicting a nymph. The arms are missing.

The Nymphs (nymphai) were minor nature goddesses which populated the earth. Although they were ranked below the gods, they were still summoned to attend the assemblies of the gods on Olympus.

The Nymphs presided over various natural phenomena--from springs, to clouds, trees, caverns, meadows, and beaches. They were responsible for the care of the plants and animals of their domain and as such were closely associated with the Olympian gods of nature such as Hermes, Dionysus, Artemis, Poseidon and Demeter. The male counterparts of the nymphs were the Satyrs, Panes, Potamoi and Tritons. 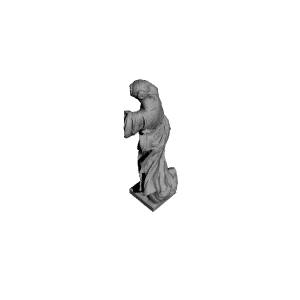 ×
1 collections where you can find Nymph by Scan The World