Described in the seventeenth century to the castle of Ecouen, this figure had in his right hand a modern rudder and represented an allegory of Fortune. Entering in 1793 , it was restored in its present state to be placed in the gardens of Versailles, where she joined the Louvre before 1802. The work copy of a Greek original Hellenistic known by other Roman copies, which Ince Blundell Hall that of bearing the inscription identifying it Anchyrrhoé. The scheme was also used to represent the muse of dance, Terpsichore. 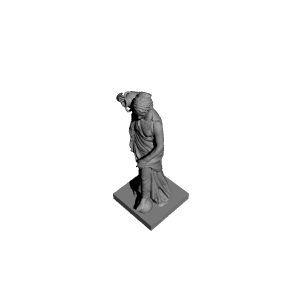 ×
1 collections where you can find Nymphe Anchyrrhoé at the Lourve museum, Paris by Scan The World
×
Angel Spy
@Angel Spy
0
Printed on: Prusa i3 MK2 Kit
Material: PLA
Posted at: 27th November 2021

just base paint on it, will be added when its done.