3D
Support Free Scan The World
2,665 views 190 downloads
Community Prints Add your picture
Be the first to share a picture of this printed object
0 comments

"An obelisk is a tall, four-sided, narrow tapering monument which ends in a pyramid-like shape or pyramidion at the top. These were originally called "tekhenu" by the builders, the Ancient Egyptians. The Greeks who saw them used the Greek 'obeliskos' to describe them, and this word passed into Latin and then English. Ancient obelisks were often monolithic (that is, built with a single stone), whereas most modern obelisks are made of several stones and can have interior spaces."

Nothing special for print this Scan the world. Printed by garagedays3d.com Printing Services. 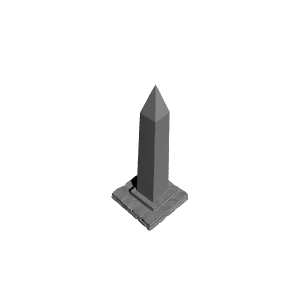 ×
0 collections where you can find Obelisk in Ghent, Belgium by Scan The World