Offering Table of Amenemhat I

3D
Scan The World
1,628 views 62 downloads
1 collection
Community Prints Add your picture
Be the first to share a picture of this printed object
0 comments

Offering Table of Amenemhat I

This imposing altar was found at the west end of a passage just outside the northern wall of the pyramid temple of King Amenemhat I at Lisht North. It must have been placed there by the quarrymen who - most probably in Ramesside times - dismantled the temple. Originally, the altar presumably stood in the open court of the temple, its roughly shaped lower part (now removed) sunken into the ground. A rectangular libation basin is carved into the top of the altar, as well as representations in flat relief of an offering mat with two libation (hes) vases and three loaves of bread, the middle one incised with the king's throne name and Horus name and the added wish: "may [he] be given life forever!" At the center of the altar's front side the incised birth name of the king (Amenemhat) forms the focus for rows of approaching fertility figures (fat men and women carrying offerings) who are designated by inscriptions as personifications of nomes (regional governorates) of northern Egypt (on the left) and southern Egypt (on the right). 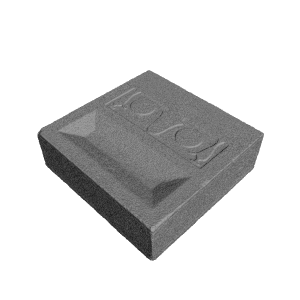