3D
Support Free Scan The World
3,814 views 188 downloads
2 collections
Community Prints Add your picture
Be the first to share a picture of this printed object
0 comments

The following has been copied from the Ogham in 3D website: https://ogham.celt.dias.ie/stone.php?lang=en&site=Ardmore&stone=263._Ardmore_I&stoneinfo=description

Early ecclesiastical site (Ard Mór/Uí Seasta – Ardocheasty townland). Early features at this site include St Declan's oratory, cathedral ruins (Romanesque), round tower, and 1 other ogham stone (CIIC 265) still on site inside cathedral walls and 1 other now in the National Museum of Ireland (CIIC 264).

According to Macalister (1945, 258) the stone 'bears two independent inscriptions in Ogham: the first, on two angles, (up-down), pocked; the second, on a third angle, [up,] chiselled'. McManus (1991, 65), however, appears to regard it as a single inscription.

According to Macalister (1945, 259) the gap in the 'first inscription' between MAQI and MUCOI gives sufficient space for a short name. He adds that 'the MU and C1 of MUCOI are lost. Below NETA the angle is spalled, but the fracture must have preceded the cutting of the inscription, as the lettering follows the present line of the edge'. The final I of MAQI is not visible to McManus (1991, 65) but faint traces of 4 of the 5 notches can be seen on the 3D model.

With regard to the 'second inscription' Macalister (1945, 259-60) says that 'there is nothing surviving after the final B: vague scratches on the fourth angle exist, but are too indefinite to suggest a continuation of the epitaph'.

On site at Ardmore in niche of chancel of cathedral. The present location of this stone may be accessed via the National Monuments Service public map viewer on www.archaeology.ie. (GPS coordinates -7.725916, 51.948800) 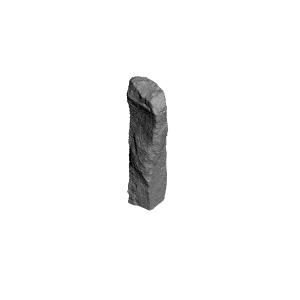