Description
This ogham stone 'stands in the elevated and exposed gap between Masatiompan and the steep N slopes of Brandon mountain, and commands a dramatic view to both sides fo the mountain range' (Cuppage 1986, 248). On the Mount Brandon pilgrimage route.

Monument
Sandstone 1.91 x 0.38 x 0.20 m (converted from Macalister 1945, 140). Note: 1.97m in height above ground (Fionnbarr Moore).
Both faces are inscribed with crosses and there appears to ahve been some dressing of the stone to prepare surfaces for the carvings. One face bears a Maltese cross with a hook-like expansion at the right side of the upper arm: this is a monogram form of the chi-rho symbol (XP). The opposite face bears a Maltese cross within a circle; the lower arm is linked to the circle by a short, straight stem' (Cuppage 1986, 248). McManus (1991, 172) notes that this ogham stone is 'discussed by Henry (1937, 376 and 1940, 29) where it is described as an imitation of the Brito-Roman type of funerary monument'.

Text
Up-top-down, 'in pocked scores, now rather worn...The turn of the angle has confused him [the carver], so that on the sinister edge he has inverted the side-scores' (Macalister 1945, 141) giving MAN SOMOGAQQ where presumably MAQ COMOGANN was intended. 'The top right hand corner is damaged and the AN recorded by Macalister is unclear as is the Q further down the same edge. Otherwise the scores are clearly legible' (Cuppage 1986, 248). This reading was confirmed on inspection of the 3d data. Regarding the unclear penultimate N of RONANN, two of the five scores are visible on the 3d model. Nothing remains of the preceding A.

Translation
'of the priest Rónán son of Comgán'

Re-erected in 1980s just a few meters from find spot (personal comment from Fionnbarr Moore) on Mount Brandon. The present location of this stone may be accessed via the National Monuments Service public map viewer on www.archaeology.ie.

Oghham stones are among Ireland's most remarkable national treasures. These perpendicular cut stones bear inscriptions in the uniquely Irish Ogham alphabet, using a system of notches and horizontal or diagonal lines/scores to represent the sounds of an early form of the Irish language. The stones are inscribed with the names of prominent people and sometimes tribal affiliation or geographical areas. These inscriptions constitute the earliest recorded form of Irish and, as our earliest written records dating back at least as far as the 5th century AD, are a significant resource for historians, as well as linguists and archaeologists.

It is easy model, there is no support on it. 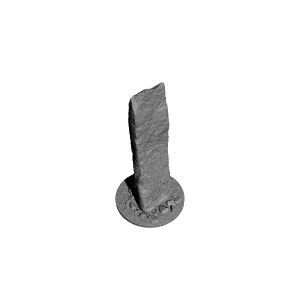 I decided to surprise my partner with a nice aquarium piece. She loves it and now wantshe me to print more.