3D
Scan The World
3,116 views 224 downloads
1 collection
Community Prints Add your picture
Be the first to share a picture of this printed object
0 comments

Description
Site
The early ecclesiastical site of Teampall Mhancháin (Templemanaghan), also known as Teampall Geal, 'has a commanding view across Dingle Harbour. The remains consist of a dry-stone oratory (standing to a height of 2.75 m in places), the foundations of some dry-stone huts, a souterrain (Poll na Sagart 'the Priests' Hole'), a burial ground and the remains of a sub-circular enclosure. There are several cross-inscribed boulders and small slabs standing in the burial ground and in front of the oratory is a large ogham-inscribed pillar' (Okasha and Forsyth 2001, 138). The ogham stone is said to mark the grave of St Manachán (Bennett and Uí Shíthigh 1995, 13)

'A cross with equal arms, expanding regularly, is cut on the face, on the dexter side of the inscription, while another cross, with expanding terminals ... is cut on the surface of the opposite face... A grafitto is scratched in a line parallel with the ogham in crudely made half-unicals. It reads FECT QUENILOC followed by a word too defaced to read' (Macalister 1945, 163-4). Note that the 3d scan of this stone showed no trace of this grafitto. Here, as elsewhere, Macalister sees the crosses on this stone as a later attempt at Christianisation but see McManus (1991, 54-61) for a valid counter argument to this theory.

Text
Up. 'The top has been broken and battered away... So far as it goes the inscription is perfectly clear, though some of the vowels are damaged' (Macalister 1945, 163). This reading was confirmed on inspection of the 3d data. Regarding the C of MUC[OI], three of the four scores are visible on the 3d model

It is tempting to equate the name MAQI-AINIA with the goddess Áine but, as McManus (1991, 109, 115, 179 n. 47) points out, 'if so AI must be an error for A as the first syllable does not contain the diphthong ai ' and palatalisation is not written in ogham.

The retention of the -I in QENILOCI in combination with the loss of -S in MAQI-AINIA suggests dating this inscription to the first half of the sixth century (McManus 1991, 95, 97). 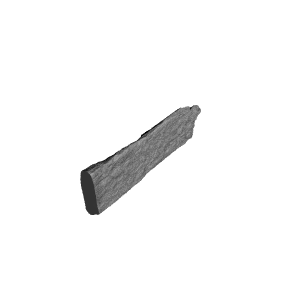 ×
1 collections where you can find Ogham Stone - Ballymorereagh (AN BAILE RIABHACH), Co. Kerry by Ogham in 3D