3D
Featured Scan The World
2,435 views 69 downloads
1 collection
Community Prints Add your picture
Be the first to share a picture of this printed object
0 comments

Text
Seemingly a palimpsest. The earlier inscription appears to have been pocked on three angles and a later one cut on one angle. In the latter, extra space has been left between the initial formula word ANM and the following personal name. This phenomonen is found elsewhere in the ogham corpus (e.g. CIIC 229 Cunburrin, Co. Kerry and CIIC 118 Monataggart I, Co. Cork). However, in this case it could just as easily be an example of letter division, distinguishing the final M of ANM and the initial M of MAQQI. The use of space in ogham to distinguish letters and words has been discussed by Moffat (2011, 290).

This later inscription is mostly legible and was read by (Lankford 1993, 3-5) who interpreted the damaged X-forfid, following the R of LASIR as a K, although he did note the possible alternative E. Considering the occurrence of ANM here, generally found in later inscriptions and frequently alongside vocalic use of the X-forfid (e.g. CIIC 187 Kilmalkedar), in the following transcription E is chosen as the better option. After the X-forfid there is an M score followed by a vowel notch and the spalled remains of the first Q of MAQQI. To the right of the angle at this point, the remains of 5 pocked scores (N) appear, apparantly from the earlier inscription. These were suggested by Lankford to be vowel notches representing an I, which seems unlikely for a number of reasons, including their relative length (see close-up image below right). He also suggests that the MA could be read as O resulting in the well attested KOI formula word. However, it is far more straightforward to simply read the X-forfid as an E and see the N as a probable remnant of the earlier inscription.

Regarding the last name, Lankford's (1993, 3-5) BIR(R)AC(I)AS is questionable after the C. There is a spall on the top corner of the stone after the C and on the very top of the stone two scores (representing a D?) and three possible vowel notches can be detected on the 3d model. However, it is difficult to say whether these scores belong with the earlier or later inscription. The scores appear to be pocked rather than cut but some of the scores in the latter half of this inscription do not appear to be as sharply cut as the earlier ones, making distinguishing between the two inscriptions difficult. 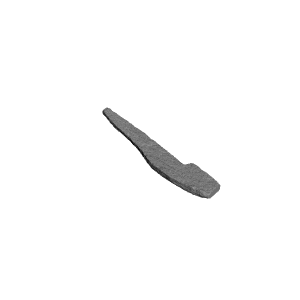 ×
1 collections where you can find Ogham Stone - Bunkilla, Co. Cork by Ogham in 3D