3D
Scan The World
2,638 views 116 downloads
1 collection
Community Prints Add your picture
Be the first to share a picture of this printed object
0 comments

Text
Inscription 'poorly preserved', boustrophedon/up-top-down. Also, 'diagonal cross enclosed in a rough rectangular frame occurs on the face of the stone between the two inscribed angles.' According to Moore (unpub. MA thesis), cross contemporary or earlier than inscription (O'Sullivan et al 1996, 242). In aggreement with Moore, the 3D data shows that there is insufficient evidence for Macalister's possible M following the S and there is not enough space at the top of the stone for an E before the R. The AQQ of Macalister's MAQQI- and the C of his -ERCIA are not clear on the 3D model. 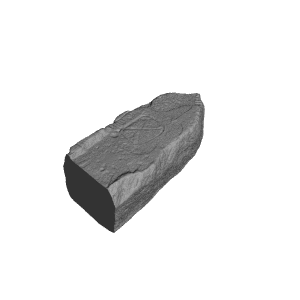 ×
1 collections where you can find Ogham Stone - Derrygariff, Co. Kerry. Macalister Derrygarriv by Ogham in 3D