3D
Scan The World
1,771 views 70 downloads
2 collections
Community Prints Add your picture
Be the first to share a picture of this printed object
0 comments

The Maya believed that old deities called Pawahtuuns held up the surface of the earth. They imagined the earth as the body of a crocodile floating on the surface of a large body of water. Above them, youthful Bacabs supported the four corners of the sky. Here you see everybody's favourite, the toothless "old man of Copan." It is the head of one of two giant Pawahtuuns from either end of Temple 11. These towering figures once held an enormous mosaic crocodile that stretched across the temple facade. The headdress is a knotted water lily, a symbol of fertility. If reassembled, the Pawahtuuns would represent the largest sculpted human figures found at Copan. 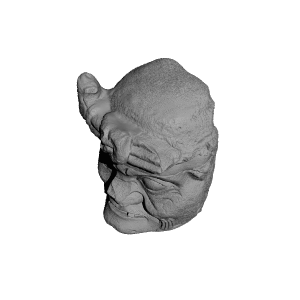 ×
2 collections where you can find Old Man, Pawahtuun Head by Scan The World