3D
Scan The World
3,634 views 248 downloads
2 collections
Community Prints Add your picture
Be the first to share a picture of this printed object
0 comments

Oliver Cromwell (1599-1658) was often represented in 18th-century British sculpture because of his central role in British history. This bust is probably based on a plaster cast of his face, made for his funeral effigy. It also shows Wilton's interest in and understanding of ancient Roman sculpture, which he had studied in Italy.

Joseph Wilton was born in London, but trained in the Netherlands, France and Italy from 1744 to 1755. He was appointed Statuary to His Majesty George III in 1761, and in 1768 became a founder member of the Royal Academy. However in the same year he inherited a large legacy from his father and neglected sculpture thereafter; he went bankrupt in 1793. 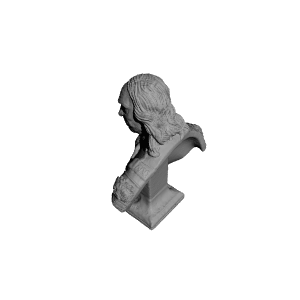 ×
2 collections where you can find Oliver Cromwell by vam