3D
360°
Featured Scan The World
2,120 views 237 downloads
3 collections
Community Prints Add your picture
Be the first to share a picture of this printed object
0 comments

This lifesize bronze is an example of the realism found in many early Hellenistic portraits.

We can assume he is victorious for he wears the winner’s laurel wreath, but it is clear he has been in quite a fight. His aging face is fleshy and rough; his mouth is slightly open as if breathing hard; and his hair is dishevelled.

The portrait would have almost certainly been part of a statue, but when excavated at Olympia — home of the pan-Hellenic festival of religion and sport — only the head was found.

The original is in the National Museum of Athens, Inv. 6439. Excavated in 1880 in the sanctuary of Zeus at Olympia. 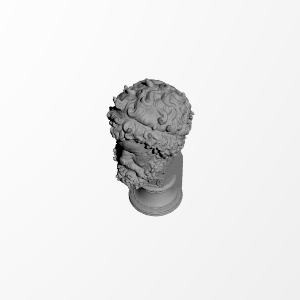 ×
3 collections where you can find Olympian Boxer (?) by SMK - Statens Museum for Kunst