3D
Support Free Scan The World
5,388 views 188 downloads
1 collection
Community Prints Add your picture
Be the first to share a picture of this printed object
2 comments

The Omphalos of Delphi is an ancient marble monument that was found at the archaeological site of Delphi, Greece.

Among the Ancient Greeks, it was a widespread belief that Delphi was the center of the world. According to the myth regarding the founding of the Delphic Oracle, Zeus, in his attempt to locate the center of the earth, launched two eagles from the two ends of the world, and the eagles, starting simultaneously and flying at equal speed, crossed their paths above the area of Delphi. From this point, Zeus threw a stone from the sky to see where it will fall. The stone fell at Delphi, which since then was considered to be the center of the world, the omphalos - "navel of the earth". Indeed, the same stone thrown by Zeus took the same name and became the symbol of Apollo, the sacred Oracle and more generally of the region of Delphi.

The marble-carved stone which constituted the omphalos in the monument with the tripod and the dancers, troubled the excavators, because they could not decide if it was the original or a copy from the Hellenistic and Roman times. In the 2nd century B.C., Pausanias traveled to the area of Delphi and has provided us with rare evidence through his work. The stone of the omphalos seems to have been decorated in high relief and had an oval shape. It is possible that in ancient times it was covered by a mesh of wool cloth and it was kept in the adyton (inner sanctum), beside the tripod and the daphne (bay leaves), the other sacred symbols of the god. As described by Pausanias, between the woolen cloth that was wound around the stone there were precious stones designed in the shape of a mermaid, while two gilded eagles were fixed on top of it.

Recent studies by French archaeologists have demonstrated that the omphalos and the columns are connected and interlocked. In other words, the stone navel was mounted on the bronze tripods supported by the three dancers, at the top of the column. This is the spot where the omphalos is thought to have been placed till today, as a cover of the column in order to symbolically supplement the meaning and importance of the Athenian votive offering. The Athenians wanting to placate and honor the god of light, offered him this copy of the original stone, which combined both delphic symbols as a gift from the hands of the three female figures of Athenian origin. 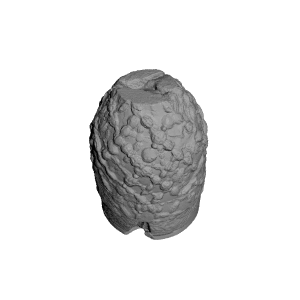 ×
1 collections where you can find Omphalos of Delphi at The Museum of Delphi, Greece by Scan The World