3D
Scan The World
2,335 views 106 downloads
1 collection
Community Prints Add your picture
Be the first to share a picture of this printed object
0 comments

Notable for both its design and its stature One Museum Park East became an instant landmark in Chicago's South Loop neighborhood when it was built. The fact that there were no buildings of similar hight nearby when it was built and its location near the lake front proved challenging during construction with winds blowing through the unfinished tower clocked at up to 99 miles an hour, according to Midwest Construction magazine. Now that it is completed, the blue glass skyscraper does an excellent job of complementing the two biggest elements of Chicago's environment -- the lake and the sky. Its shape, similar to the bow of a ship pushing up the lake shore is a nod to the importance of the body of water just a few hundred yards away. That bow is trailed by five setbacks which ripple like a wake behind the building's main facade. The summit of the building is topped with an architectural crown and a curving screen which hides mechanical elements. 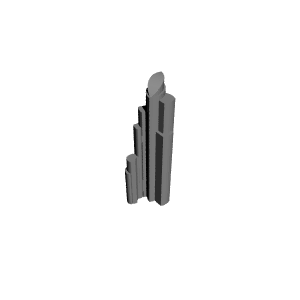 ×
1 collections where you can find One Museum Park East in Chicago, Illinois by jkurstin22