One South Dearborn in Chicago, Illinois

3D
Scan The World
2,197 views 78 downloads
1 collection
Community Prints Add your picture
Be the first to share a picture of this printed object
0 comments

One South Dearborn in Chicago, Illinois

One of the Loop's newer office buildings, One South Dearborn is modest enough to fit in with its surroundings, but bold enough to draw attention. Its main visual feature is the enormous four-story "lantern" at the top of the building. This gives the building a visual point of difference, ensuring that it's not viewed as just another blue glass box. It also helps hide mechanical and HVAC equipment on the roof. During the day the lantern is illuminated naturally by sunlight. At night man-made illumination helps One South Dearborn stand out from other nearby buildings. Of course, "blue glass box" isn't necessarily a bad thing. Far from it. The building's facade helps provide a gradient from the commonly azure Chicago sky to the gritty pedestrian-scale city. And great pains were taken to be sympathetic to the landmark Inland Steel building. One South Dearborn's non-glass grid mimics the size and color of the one next door at Inland Steel. The reverence for 30 West Monroe isn't limited to the facade. The entire mass of One South Dearborn is set back from Dearborn Street in reverence. Its front facade lines up with Inland Steel, and would create a wonderful double-sized front yard if it wasn't for a troublesome ramp leading to an underground loading dock at the older building. The top of this building isn't the only place where glass plays an important role. The lobby is enclosed by huge cast glass panels that keep the weather out, but beckon pedestrians in. The cascade of glass simulates crystal clear water falling into a moat of recycled glass. That glass is in the form of random lumpy shapes and mimic the rocks similarly lined up in the public plaza. The arrangement allows people walking by to view the happenings in the lobby from the comfort of the street, eliminating the mystery and caution that keep many people from embracing skyscrapers as human-scale architecture. It has to be one of the most welcoming lobbies in the city. Moreover, allowing in all that light helps cut down on interior illumination expenses. One of the best things about this building is the public plaza in front, which features angled benches, ornamental benches, maple trees, and smooth river rocks. The architect's intention was to create a soothing place in the middle of the urban jungle. Whether that's actually possible is up to the disposition of the individual, but it has become a very popular place for weary office workers to sit and reflect upon their lives. 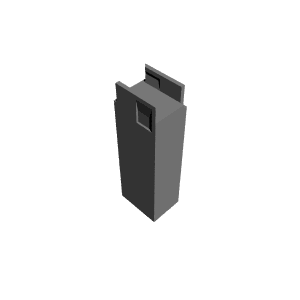 ×
1 collections where you can find One South Dearborn in Chicago, Illinois by jkurstin22