3D
Scan The World
2,868 views 142 downloads
1 collection
Community Prints Add your picture
Be the first to share a picture of this printed object
0 comments

OneEleven (formally 111 W. Wacker and Waterview Tower) is a luxury rental apartment tower in The Loop neighborhood of downtown Chicago, Illinois, United States. The building is located between LaSalle Street and Clark Street, adjacent to River North and directly on the Chicago River. The building was developed by Related Midwest in a joint venture with Clark Wacker LLC and designed by architect Gary Handel of Handel Architects LLP. Kara Mann of Kara Mann Design was selected for interior design. OneEleven was completed in 2014. OneEleven stands 630 ft. (190 m) tall and has 504 units throughout its 60 stories. The building has 470 total parking spaces, approximately 30,000 sq. ft. of amenity space, and 32,000 ft. of retail space. OneEleven was designed as a retrofit for the abandoned Waterview Tower project of which only 26 floors were ever completed. The old building was salvaged and renovated. The original stone façade of the building was removed in favor of a glass exterior, and an additional 34 floors were added to its height. Where the old and new sections of building meet there is an amenities level with indoor pool, sun deck, firepit and outdoor kitchens.

Construction began in 2005 through May 2008, when construction ceased on the original Waterview Tower after the parking garage portion and most of the hotel floors were completed. The project was idle until in May 2010, when a consortium of creditors and lienholders (called Clark Wacker LLC) took over ownership of the project and formed a Joint Venture with Related Midwest in July 2011 to restart and complete the project. The first 26 floors of OneEleven were originally part of Waterview Tower, which was intended to be an 89-story luxury hotel and condominium before financial setbacks caused construction to halt in 2008. It was initially planned to have parking for guests and residents on floors 2 to 11. A setback at the 29th floor level would have held a rooftop garden3 in addition to being the amenities level for all building guests and residents.The remaining 30th through 88th floors were to have comprised 233 condominium and penthouse residences. The building was originally designed to be a concrete building with an exterior wall made of glass, granite, and aluminum to generate a prismatic look. In 2011, developer Related Midwest took an interest in the abandoned tower and conducted an engineering study of the property to determine if any of the existing structure was salvageable. The results of the study were favorable and it was decided to renovate and add onto the old tower. In 2012, 111 West Wacker Partners LLC, the new Joint Venture, proposed a completely new design that will repurpose the existing structure into a luxury, rental tower to better suit the current real estate market. As a result, the building will no longer contain a hotel and condominiums, but contain 506 rental units, an expansive first floor retail space and 439 parking spaces. The new building, designed by Handel Architects is substantially smaller in height at 59 stories and 630 ft (190 m) tall. 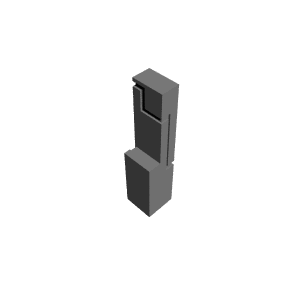 ×
1 collections where you can find OneEleven in Chicago, Illinois by jkurstin22