3D
12,704 views 561 downloads
6 collections
Community Prints Add your picture
Be the first to share a picture of this printed object
2 comments

My first time creating a miniature! For my first release, this is Lamashtu, Mother of Monsters. She's a signature villain in Pathfinder's Golarion, but she is a great villain to use in any fantasy rpg. Lamashtu is based on an ancient Mesopotamian demon. The historical mythological Lamashtu was a female demon, monster, malevolent goddess or demigoddess who menaced women during childbirth and, if possible, kidnapped their children while they were breastfeeding. She would gnaw on their bones and suck their blood, as well as being charged with a number of other evil deeds.

In Pathfinder, Lamashtu is an arch daemon who has achieved godhood, and she is known as "The Mother of Monsters". She is the mother and patroness of many misshapen and malformed creatures that crawl, slither, or flap on, above, or below the surface of the world.

In either case, she and her cult make a fantastic nemesis and big bad. I have also released a Shrine to Lamashtu, with this figure being used as a statue.

For instructions on how to get started with OpenForge, take a look at our tutorials.

OpenForge is now a patron supported project. We use the resources that our patrons give us in order to get the resources to let us create more sophisticated tiles with a greater level of detail. Please, support us, and we’ll deliver an ongoing stream of awesome gaming terrain. You can find more about OpenForge and Masterwork Tools at our: 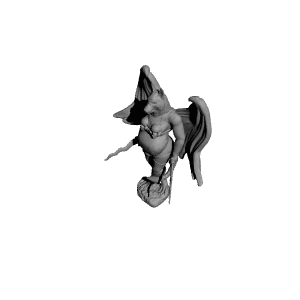 ×
6 collections where you can find OpenForge Miniature: Lamashtu by devonjones