3D
2,666 views 163 downloads
4 collections
Community Prints Add your picture
Be the first to share a picture of this printed object
0 comments

This page is to provide an update space for the rules for our 3D-print-and-play game, OpenTactics. We're running a number of collections here on Thingiverse that will catalog the various sets, characters, and terrain that we design for the game, but this space in particular will hold the core rules PDF that we'll be updating as changes occur and new material gets added. Ultimately, we want OpenTactics to allow you to create your own characters, either from our library of models, models you like made by other designers here on Thingiverse or by established manufacturers, or custom models you make yourself. Speaking to that, if you do design your own stuff and want to contribute it to the game, let us know and we'll look at adding it to the growing canon. We'd really like for this to be a community-driven, open source gaming experience, with players and designers sharing their ideas.

In addition, the activation counters included here (totally optional) can be used in place of the usual five you would use, with each granting a special effect when played. SWORD (bonus re-roll to OFF die during the re-roll phase), SHIELD (bonus re-roll to DEF die during the re-roll phase), BOOT (+1 move distance during a movement, charge, or deployment), ARROW (+1 range value during a Ballistic or Arcane assault), and one blank counter that gives no special benefit.

Definitely expect files here to change, but I'll try and keep an update log going in the comments, so if you're interested, maybe throw a watch on the page. This is definitely a beta stage in the game, but we've had some fantastic play tests so far and really want to hone this one into something special.

STEAM WORKSHOPS: OpenTactics is now public on the Steam Workshops for Tabletop Simulator! If you have that program and you would rather play there than in meatspace, we plan to continue updating with any content we put here. Tabletop Simulator is really fantastic, and it makes this game all the more accessible to those without access to 3D printing.

We've set up a Patreon page for anyone who's interested in helping to fund us so we can keep making free and open sourced games like OpenTactics, Pocket-Tactics, Discord, and others, not to mention the growing catalog of gaming miniatures that you can use for whatever you want! (Psst... we take requests and commissions...) 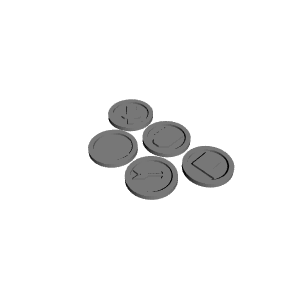 ×
4 collections where you can find OpenTactics Rules Page by dutchmogul