Orlando Furioso in The Louvre, Lens

3D
Scan The World
6,288 views 573 downloads
1 collection
Community Prints Add your picture
Be the first to share a picture of this printed object
0 comments

Orlando Furioso in The Louvre, Lens

Roland was the bravest and most loyal of the 12 legendary paladins, or knights, who served Charlemagne, king of the Franks*. Although Charlemagne was a historical figure, many fanciful tales about the king and his knights appeared during the Middle Ages. It was said that Roland stood 8 feet tall and carried a magical sword called Durindana (or Durendal) that had once belonged to the Trojan hero Hector.

According to medieval stories, Roland (or Orlando) was the son of Charlemagne's sister. Living as a poor peasant in Italy, he was welcomed to the court of the king after his true identity was revealed. Although a powerful warrior, Roland's concern with winning honor and fame eventually cost him his life.

Ganelon to negotiate with the Muslim leader. Instead, jealous of Roland, Ganelon plotted with the enemy and revealed the route Roland's army planned to take. The Muslims waited for Roland and ambushed him at Roncesvalles in the Pyrenees Mountains.

The paladins had told Roland to blow his ivory horn to summon reinforcements from Charlemagne, but Roland refused to call for help until the battle was almost lost. By then it was too late. When Charlemagne's troops arrived, Roland and many of the bravest paladins were dead. At the end of the story, Charlemagne had Ganelon killed for his treachery

The expressive power of the Roland, whose destructive fury was hampered, impressed the public 1831. Betrayed furniture in his love for the princess Angelica, the paladin expresses his despair with unprecedented violence, any romantic. However, Duseigneur honors her knight worthy of heroic nudity of classical sculpture.

Duseigneur young sculptor, 23, caused a sensation at the 1831 Salon by presenting the plaster model of Roland furious. The violence of the expression immediately made a manifesto of romantic sculpture. Owned by the wrath of her unrequited love and struggling to free himself from his bonds, Roland band muscles, twists his limbs and torso, hands gripping the ground; the face is contorted in pain, eyes are rolled back by dementia. The writer and poet Théophile Gautier (1811-1872) dedicated an ode to the sculptor, where he sings:

"Roland the paladin, who, foaming at the mouth,
Under a frowning, rolling a fawn and fishy eye,
And on acute rocks he uprooted,
Naked, mad love, the fire in the nostril
Protrudes large bones of her large breasts,
And twists his chained members. "

The work, however, reveals all the ambiguities of romantic sculpture.

The sculptor was inspired by Orlando Furioso (1516-1532) of Ariosto, which recounts the adventures of Charlemagne's paladins. Roland, the bravest of them learns that Angelique, the beautiful princess of Cathay which he is madly in love, loves another. Mad with grief, he throws his armor, tore his clothes and gives way to fury, uprooting trees with bare hands. Knights friends manage to bind to end its ravages and try to bring him to reason.

The subject seems to share the taste of the Romantic generation for the Middle Ages. Duseigneur, which belonged to the inner circle of Victor Hugo, had also adopted the medieval name Jehan. Yet the artist does not describe a knight in armor, with all its picturesque paraphernalia. He chose the only passage where the hero is stripped, allowing him to justify a virtuoso demonstration academic nude, consistent with the classical tradition. The Conservative critic Gustave Planche also appreciated "some good muscle portions."

Seminal work of romanticism, it was not yet transcribed bronze that 36 years later, after the death of the artist. His son Maurice the melted at its expense and sold it cheaply to the state. It was presented a few years in the garden of Luxembourg before entering the Louvre in 1900. 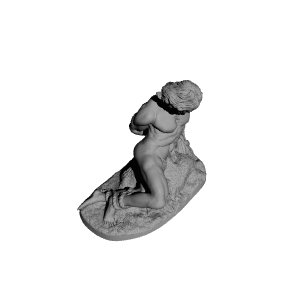 ×
1 collections where you can find Orlando Furioso in The Louvre, Lens by Scan The World