Oscar II at the Magritte Museum in Brussels, Belgium

3D
Scan The World
2,934 views 106 downloads
1 collection
Community Prints Add your picture
Be the first to share a picture of this printed object
0 comments

Oscar II at the Magritte Museum in Brussels, Belgium

This is a painted bronze bust of the Artist with a shotgun nose inspired by the Magritte portrait 'Oscar'; it was sculpted in 2000 by British artist Gavin Turk and was scanned in the Magritte Museum in Brussels.

"This rather curious looking character with bulging eggs for eyes and a shotgun nose is taken from a Magritte painting ‘L’ellipse’. He has become a self portrait turned 2D to 3D and cast in bronze and then painted with all the lurid and clashing colours of the original. Magritte is one of the most striking and consistent of the so-called surrealists and his imagery permeated the Artist’s work His child-like painting syle produces image after image of the familiar meeting the unfamiliar. Like dreams that take the realities of the day and collage them into impossible yet highly plausible scenarios, Magritte expresses his subconscious on canvas. Oscar is a character from a period of his life called by critics his ‘Vache’ or ‘Renoir’ period, when he appeared to be reacting against the controlled, meticulous and tranquil clocks and pipes and moustaches: the signifiers of ordered civilized European society. Suddenly he got expressive and violent – but with humour.

The violent imagery of the shotgun impotently and Pinnochio-like in place of a nose (sneezing out the bullets), juxtaposed with the spooky eye peering from the bowler hat – symbol of power and professionalism and of course the grown-up gentleman’s ill fitting check suit. This contrasts with the fay positioning of the back to front hands offering up – or is it pleading in supplication?" From artist's website. 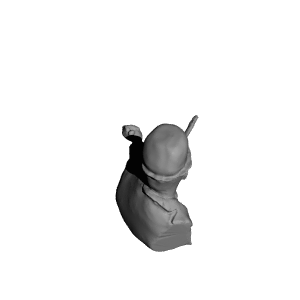 ×
1 collections where you can find Oscar II at the Magritte Museum in Brussels, Belgium by Scan The World